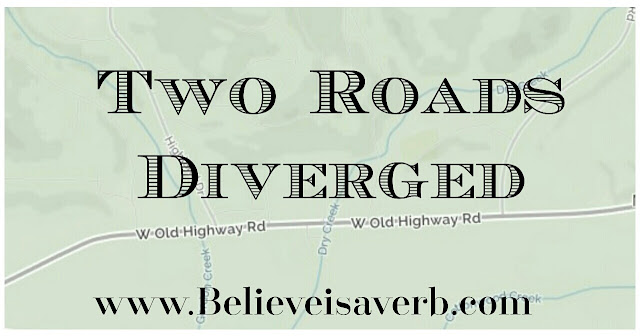 This morning, for whatever reason, the poem "The Road Not Taken" by Robert Frost filled my mind and wouldn't let go until I read through it again.


The Road Not Taken
Two roads diverged in a yellow wood,
And sorry I could not travel both
And be one traveler, long I stood
And looked down one as far as I could
To where it bent in the undergrowth;

Then took the other, as just as fair
And having perhaps the better claim,
Because it was grassy and wanted wear;
Though as for that the passing there
Had worn them really about the same,

And both that morning equally lay
In leaves no step had trodden black.
Oh, I kept the first for another day!
Yet knowing how way leads on to way,
I doubted if I should ever come back.

I shall be telling this with a sigh
Somewhere ages and ages hence:
Two roads diverged in a wood, and I —
I took the one less traveled by,
And that has made all the difference.

I first read and memorized it back in middle school for a school assignment. Even then, the meaning behind the words resonated deep within. I've often taken the road less traveled. My choices have yielded both bad and good consequences. For the most part, I have few regrets.

We're often confronted with choices in life. Some seem as similar as the two roads described in the poem, with very little to distinguish them other than a fair bit of grass. Other times, the roads are as different as night and day. There are times the poor road - filled with potholes and detours - is obvious. And other times, it looks just like the good road.

As we follow Christ and listen to the promptings of the Holy Spirit, signposts are clear to see and our choices are made easy. They are like a spiritual GPS in the road of life, helping us to our final destination.

When we choose to ignore the signs provided, we often find ourselves in dark and dreary places, far from home. However, we can choose to change our direction once again and make our way back to our preferred route. Forgiveness is simply finding a new path.

Be careful in your choices. Look for the signposts and seek for the paths that will lead you back to our Heavenly Father. For the road we take truly makes a difference.

Believe is a verb. A verb is an action. Therefore, to believe is to ACT.